Princess Evangile was released in English with both an 18+ version from MangaGamer’s website, as well as an all-ages version on steam. It had fairly good reception and seemed to get a large enough amount of sales to be considered a pretty decent success. (At least as far as I can tell. In any case, It did well enough to warrant getting its fandisk translated.)

Okonogi Masaya is the protagonist of Princess Evangile. He is left with a considerable amount of debt that his father pushed onto him. After saving a girl who appeared to be in some trouble, Masaya finds himself enroled in Vincennes Academy, an all-girls high class school.

Vincennes Academy is having trouble financially, but the solution of making the school co-ed is met with strong opposition. Masaya is enroled in the school on a trial period to give the other students an example as to what the opposite gender is like, as most of them have never really interacted with males outside of their own families. At the end of the trial period, Masaya will be forced to leave to school and go back to his life of being chased by debt collectors if the vote to allow the school to become co-ed doesn’t pass.

If I’m going to be honest, I didn’t really enjoy Princess Evangile as a whole. It’s not really a bad game, it just didn’t really manage to keep my interest after the common route ended. I’ll try to go over some of my issues about the game, I just hope my memory from ~6 months ago isn’t too vague.

It wasn’t actually until after the common route ended that I had an problems with the story. The common route is for the most part about Masaya enjoying himself in school with his new friends. There are some darker parts to the story, mainly resolving issues around some of the more vocal of students who are against Masaya’s enrolment in the school. (Although they all eventually realise that Masaya is actually a decent guy and slowly accept him.) Once the character routes started however, the issues they face came across as unbelievable or exaggerated. I couldn’t really take it seriously enough for me to enjoy it properly.

As far as the system itself goes, the graphics quality is quite good. As not very many translated visual novels are available in wide screen Princess Evangile is one of the few visual novels available in a higher resolution than normal. I am currently listening to the game’s ost as I write this, and while it doesn’t stand out and is honestly pretty forgettable, it does a fine job of complementing the scenes in the game.

Anyway, like I mentioned earlier, this game was pretty well received so give it a go if it seems like something that would interest you. MangaGamer recently opened pre-orders for the limited edition hardcopy version of Princess Evangile. It includes a 40 page artbook among other things, and just like the download version, it includes a free steam key to unlock the all-ages version. 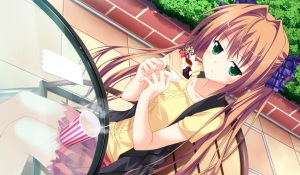